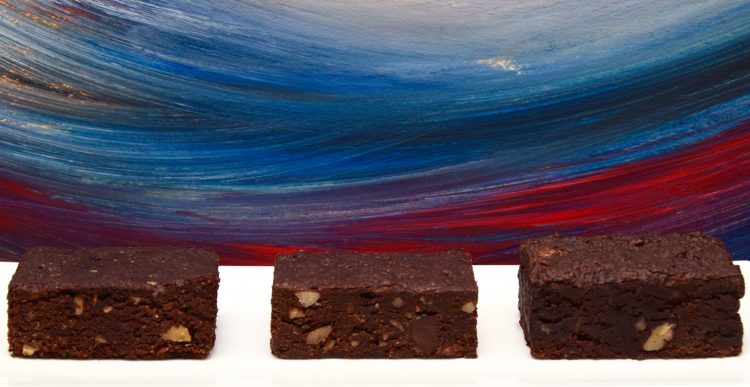 A friend recently asked if I had any vegan brownie recipes? A reliable recipe I use has black beans as the base, and actually, they are more like a protein bar. It’s a great recipe from the No Meat Athlete and I’ll share that in another post!

I have to say, it’s rare that I go the route of vegan when making brownies. I enjoy them as a treat, which I find most intense when made with butter and eggs.  I have my favourites – made with salted butter, or browned butter; and then there’s the triple chocolate recipe from Mabel’s Bakery in Toronto. This one has a chocolate ganache on top that seals the deal on decadence.

Back to the vegan question: I asked my nieces in Toronto. One is vegan, and the other is a mom of two who is doing her best to keep dairy out of her children’s diet. They both pointed me in the direction of Angela Liddon, author of one of my vegan favourites:  The Oh She Glows Cookbook. On her website, Liddon has posted, Vegan Brownies: Two Ways. Last week, I tried the Vegan and Gluten Free recipe, twice. I tried the Vegan recipe, once. After you have a look at the recipes, keep in mind my editions.

Looking at my photo, from left to right, are versions One, Two, and Three.

The first time I made the Vegan and Gluten Free recipe, I followed the recipe closely but used buckwheat flour instead of brown rice flour because over here in The Netherlands, I find the rice flours to be a bit grainy. I only had cornstarch on hand, so that’s what I used to help bind. I used a soya margarine for the fat aspect.  Verdict – not my favourite! My students and colleagues liked them because they were “cakey”. I am not a fan of a cakey brownie. I prefer a dense, fudgy consistency. Despite being left overnight in the fridge, these crumbled (as she had mentioned they might) and I found them to be a bit dry.

With this experiment under my belt, and feeling a bit disappointed with the result, I went home Friday with a mission to tweak it and went for a second attempt. As it was St.Patrick’s Day, I headed to the beer section and bought some Guinness! There are Guinness cakes, why not a Guinness brownie?! In brownie number Two (middle pic) I also used buckwheat flour, but I managed to find arrowroot powder, so used that. I also chose not to use baking powder, knowing the bubbles from the Guinness, although few, might give it a lift. I used beer when I made my flax egg, and I used it in place of the almond milk. Dark beers tend to have a coffee note to their flavour; coffee intensifies the taste of chocolate, so this seemed like a viable substitute. I chose to toast pecans for the nut bit, and added 1/3 chocolate chips to the batter. More chocolate never hurts! Result:  better than batch one. Eliminating the leavener was a good idea. I also reduced the baking time by about 5 minutes. As I often do, I brought this batch to share with the people at my hair salon. I like this group of taste-testers because I get a variety of opinions from the customers – people who don’t know me. They loved them! I… liked them; which is to your benefit, dear readers! They were more dense than batch One. Did not fall apart. Had more depth in flavour. But for me, something was missing – that fudgy, chewiness I look for in a great brownie.

On to batch Three! If I were Goldilocks, this would be baby bear’s bowl of porridge! I decided to change tack on this and switched over to the other recipe on the Oh She Glows site – Vegan Brownies, but not gluten free. In my version, the main thing I changed was the type of flour I used = spelt. It has gluten, but not as much as regular flour. I also soaked the flax in almond milk, used 1/2 cup of chocolate chips to add along with toasted pecans. She suggests 1/4 cup of chocolate chips – if you know me, this is but a whisper…so I went for 1/2 cup. These brownies are fabulous! Without being massively dense, they are chewy, fudgy, deep in chocolate flavour and have the perfect balance of brownie to chocolate bits to nuts, and I am really pleased with the result!

Are you still with me? Thanks for reading this far. If you are wanting to try a new brownie recipe I can recommend these from Oh She Glows. I hope I have given enough description so you can choose a version that is to your liking. And by all means, tweak away! You can play around with some substitutions in nut preference and the amount of chocolate you incorporate. To keep them dense, add enough sugar and ditch the baking soda.

I’d love to hear back if you try one of these versions. Enjoy every bite 🙂

P.S. Check out the books by Angela Liddon. When it comes to vegan, she’s my go-to.