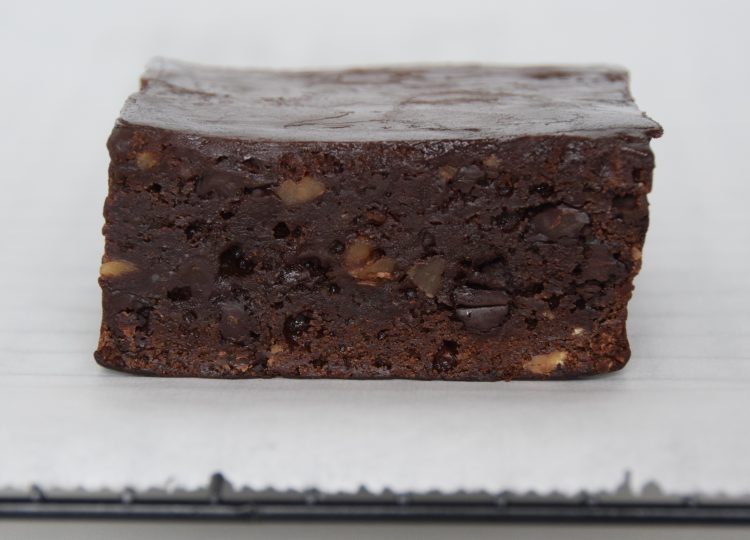 “Mabel, Mabel, if you’re able, get your elbows off the table!”
Mabel, the cat.
And, Mabel’s Bakery, in Toronto.

I know of one, two, three Mabels! The first, a childhood rhyme delivered to mind our manners at the dinner table. The second, a charming kitty, owned by a best friend in Toronto. And finally, Mabel’s Bakery, where Lorraine Hawley is behind their outstanding signature triple chocolate brownie.

The triple comes in the form of cocoa powder, 72% chocolate pieces, and chocolate chips. This brownie not only tips the scale (butter + eggs + sugar + chocolate!) it also weighs in on intense chocolate flavour in a dense, fudgy brownie, (just the way I like ’em!) and, unusual for a brownie, it’s topped with a creamy, deeply chocolate ganache. Mabel’s recipe does not include nuts. Mine does. I add about a cup of toasted, chopped walnuts or pecans to the mix to balance out the solid mass of richness this brownie delivers.

I was introduced to Mabel’s Triple Chocolate Brownies via the Toronto Star back in January 2012. I immediately got to work, replicating the recipe in my Amsterdam kitchen. To rave reviews from my taste-tester friends, and students, it soon became a “keeper.” A couple of years ago, one of my nieces moved to the area near Mabel’s St.Clair location and I had the pleasure of trying their version firsthand, where, without a doubt, it’s absolutely delicious! Each time I go to Toronto, a saunter over to Mabel’s happens within the first day or two of my arrival. Indebted to Lorraine Hawley for generously sharing her recipe, Mabel’s is the favourite of my homemade brownies. Click on the link cited earlier in this paragraph so you can stock your pantry with what you need to whip up a batch. And if you’re in Toronto, Mabel’s Bakery has three locations ready to deliver this piece of chocolate heaven.