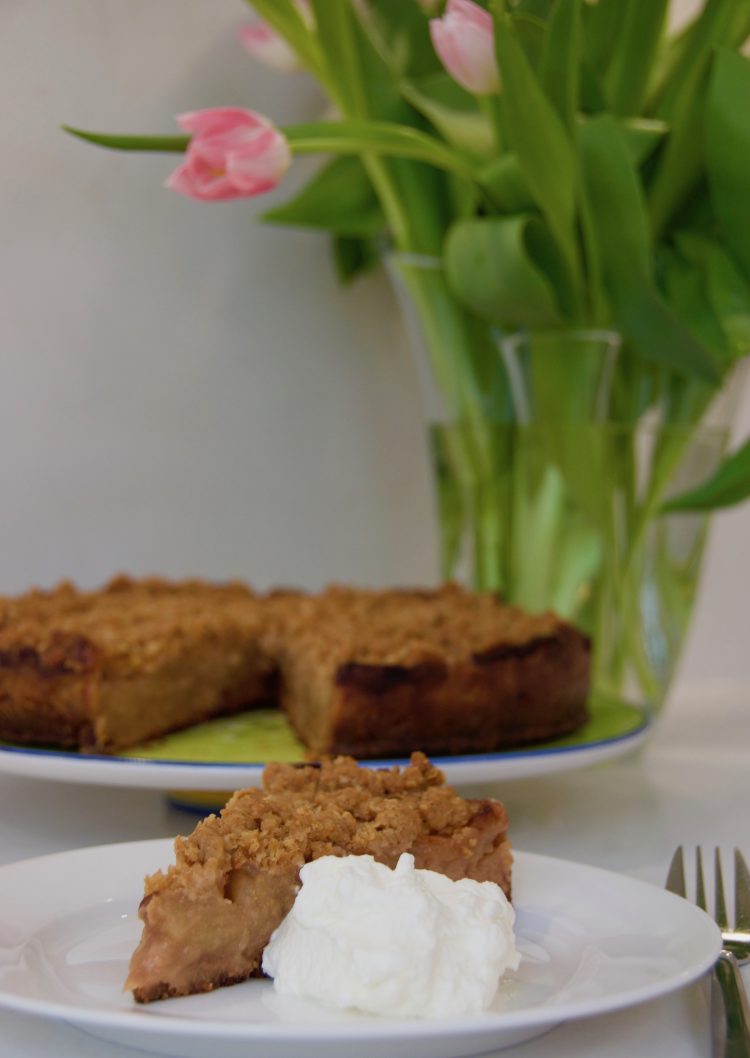 This recipe was inspired by Jean Kwok’s novel, Searching for Sylvie Lee.

Book reference, p176:  Filip and Amy after the concert, go to the Winkel Café. “Filip pronounced it “Vinkel” instead of “Winkel” like it says on the striped green-and-white awning. Diners sit at tiny wooden tables laden with meat pies, club sandwiches, thick slices of apple pie, and tall glasses of layered espresso and foamed milk.”

Traditional North American Apple Pie comes with a pastry base and lid. If the pastry is buttery and flaky, it’s sometimes the reason for eating apple pie! Apple cake, on the other hand, has a spongy texture, and you can find small pieces of apple dotted throughout the cake. Apple crumble is a different dessert entirely – typically with no base, apple crumble showcases apples, sugar, cinnamon and lemon in a deep dish pan, topped with a crumbly buttery crunchy topping that is typically made with oats.

The Dutch have their own way of making apple pie. Living in Holland for 15 years, I’ve sampled a lot! Truly, no two shops make it exactly the same. In my experience, the Dutch like their apple pie with a pastry bottom, which is then packed with fruit and held together in a deep-dish pan. This is often topped with a streusel-like, crumbly topping. In this recipe, I have cut out the need to roll out any dough. Instead, the base is prepared much like you would a shortbread crust. After filling the base with apples coated in lemon and cinnamon, you create a crumble topping with the addition of oats for a little extra texture.

In a large bowl, mix together the flours, brown sugar, and 1 teaspoon of cinnamon. Next, add the bits of butter and cut them into the mixture by using a pastry cutter or an electric mixer and blend until it comes together in pea-size crumble. Press ⅔ of this mixture onto the bottom and up 3cm of the sides of a 23cm (9 inch) springform pan.

While the oven is heating to 180C/350F, peel and core, then slice the apples into a large bowl. (Should any liquid accumulate, pour it off.) When all of the apples have been sliced, drizzle with lemon juice and the other teaspoon of cinnamon and toss all to coat evenly. Place them into the prepared springform, being sure to fit them comfortably into the base. Given the quantity, they may mound higher than the edge of the pan – this is fine, as they will shrink when you bake the pie. Now is the time to add the extra ¼ cup of oats to the mixture for the crumble topping, and sprinkle this remaining crumble on top.

Line a cookie sheet with baking paper, place the pan on top, and bake for 75 minutes, or until the top starts to turn golden brown. At this point, remove the pie from the oven, run the blade of a knife around the edge, and place the cake tin on a wire rack to cool completely before releasing from the springform. Serve at room temperature, in the traditional Dutch way, with a bit of whipped cream on the side.